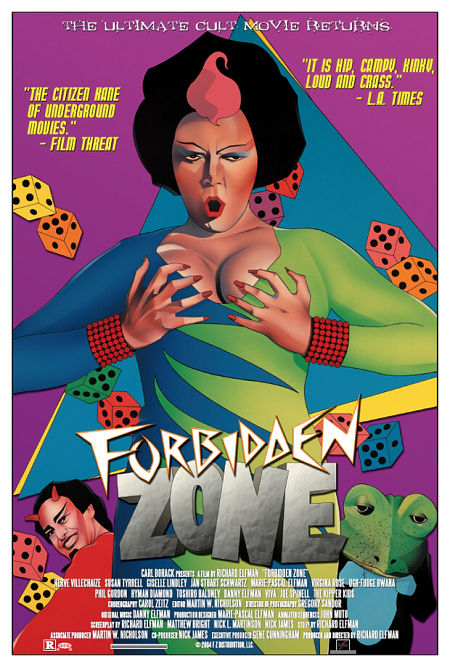 Alright, IFC lovers, its time to enter Richard Elfman‘s  Forbidden Zone, but only if you dare!  Fortunately, we here at Indie Film Cafe was made of stern stuff, so that not even the weirdest, strangest, wackiest oddball moosical ever created can keep stinker professionals down – check out our latest PODCAST see see cow the devil we made it through this one!

Our story involves the Hercules family, an assorted cast of singing oddballs who get caught up in a strange dimension leading from their basement, through a series of pipes and guts, and out of a sphincter with some  poop pillows, and into a crazy world lead by diminutive King Fausto, and his charming bride Queen Doris! Hervé Villechaize (“Man with the Golden Gun”, tv’s “Fantasy Island”) plays the tiny regal ladies man and ruler of the Forbidden Zone, which, well frankly defies description – let’s just say it is a pretty weird place.  Frenchy (Marie-Pascale Elfman, Richard’s then wife) pops in and runs afoul of Queen Doris, played to the hilt by Susan Tyrrell (“Big Top Pee Wee”, “Cry Baby”).  Chicken Boy Squeezit (screenwriter Mathew Bright, who also plays sister Rene), also floats about.  The whole weird mess is buoyed by a great soundtrack, ranging from 40’s French cabaret moosic to Cab Calloway, to New Wave (Oingo Boingo), and is entirely based on the late 70’s stage show of the Mystic Knights of the Oingo Boingo, which Elfman (and brother Danny, who did the moosic AND had a great turn as the Devil) cowcocted and performed.

Well, the kids at Indie Film Cafe awarded a range of scores: a 7 from the MooCow (who’d seen it before a few times), while first-time witnesses Johnathan (9) and Lenore (8) barely survived the experience, and their scores reflect it.  That’s a total stink score of 24, and a Stinky Average of 8.0!  Definitely a lotta stink to this strange flick, but also a lot of fun and faboo moosic as well!

We have the color trailer HERE.   Git yer hooves on a dvd copy at Uncle Amazon.  The Ultimate Edition includes the soundtrack (which you need!), which cowtains both the original black & white plus the new color version — all in sterling hi-def and state-of-the-art sound mix!  You can get the soundtrack only on compact disc (remember those?) HERE, and the REAL old school folks can get it on vinyl HERE.  Get the awesome POSTER while it is still available on Ebay, and a whey-kewl tee shirt HERE.  Great news!  A long-awaited sequel is in the works, and Richard Elfman himself promises it will be bigger, badder, and bolder than the original – check out the Media Kit for moore info!

The Sixth Dimension is a weird, wonderful place, but we here at Indie Film Cafe encourage you to hold your breath, and your nose, and dive right in – the waters are fine, and undeniably wacky!!!
:=8D