Yeah.  The dvd cover seems pretty epic, doesn’t it?  And the movie?  Weeeeellllllllll…not so much.  Talk about jumping the shark!
:=8P

Still reeling from the horrific Nic Cage vampire flick, the kids at Indie Film Cafe were next assaulted by this stinky shark flick that smells like old bait left out in the sun for too long.  We are talking about, of course, “Raiders of the Lost Shark”, and if you came looking for fun parody flick that paid lighthearted homage to both “Jaws” and “Raiders of the Lost Ark”, you would be sorely disappointed.  Folks who bought this tripe were bemoaning their Lost Dollars – check out the latest podcast EPISODE to hear all the gory details!

So, there is a lake in Canada, and it has a shark problem, specifically the same shark problem that haunted the area in a previous moovie, “Jurassic Shark”.  It seems folks are getting themselves et, including old guards trying to pass off as teenagers, their dates, and some dumb students who have trouble sitting in a boat.  There is a crazy scientist, a dragon lady who runs a secret military lab, a loopy boat captain who gets his head bit off, a sheriff with no pants, and a fish scientist whose sister was et in the first film.  And, of course, there is the titular “Lost Shark”, who might be lost, but who can hide all 35 feet of himself in 3 feet of water AND fly in the sky like an evil toothy rocket.  And it roars.  Are we getting the picture here?

Yeahhhhh.  This moovie is about as lame as a one-legged greyhound.  The jokes are flat, the acting bad, the fx cheesy AF, and the whole thing just comes off as pathetic.  Canadian Director Brett Kelly (“My Dead Girlfriend”, “Prey for the Beast”, “Pirates: Quest for Snake Island”) has dabbled before in low budget cheesy howlers, but this one just feels lazy, half-assed, and technically bojangled.  Scenes take place in empty, half-finished sets, or on an “island”, which feels moore like clump of weeds surrounding a flooded storm drain.  And that roaring CGI shark is just…yuck.  Ohhh the simmering flavor of FAIL, Ottawa style!  According to their IndiGoGo page, the special effects cost them 900 bucks – atsa lotta Tim Horton’s!

I dunno moost of the people involved in this flick, probably because they’re all from UP THERE! Candice Lidstone (“The Scarecrow Club”, “Homicycle”, “Hen’s Night”) plays fish Professor Carly Reynolds; she does the best she can with what she’s been given, but its not mooch; still, she gives one of the better performances.  Udders who are good include  Kendra Summerfield (“Homicycle”, “Ghastlies”) who plays a busty blonde student who gets et; and snuggly Faith Rayah (“Kissproof World”, “Friday Night Death Slot”) who plays a snobby Quebecois hottie who also gets et, unfortunately.  Catherine Mary Clark (“Homicycle”, “Spyfall”, “C.R.Usher”) plays the wooden Dragon Lady who is trying to cowvince Carly to help her kill the “prehistoric shark”.  Cutie Tanisha Valcin (“Avenging Force: The Scarab”) plays the bikini-clad “FLYING SHAAAAARK” girl

Well, it was unanimous: Moody, the MooCow, and special guest Lenore the Science Babe all scored 9s for “Raiders of the Lost Shark”, which adds up to a Stink Total of 27 – which is actually less than I would have expected.  Still, a moost palpable cloud of stink on this one…even though they clearly were not taking this seriously. 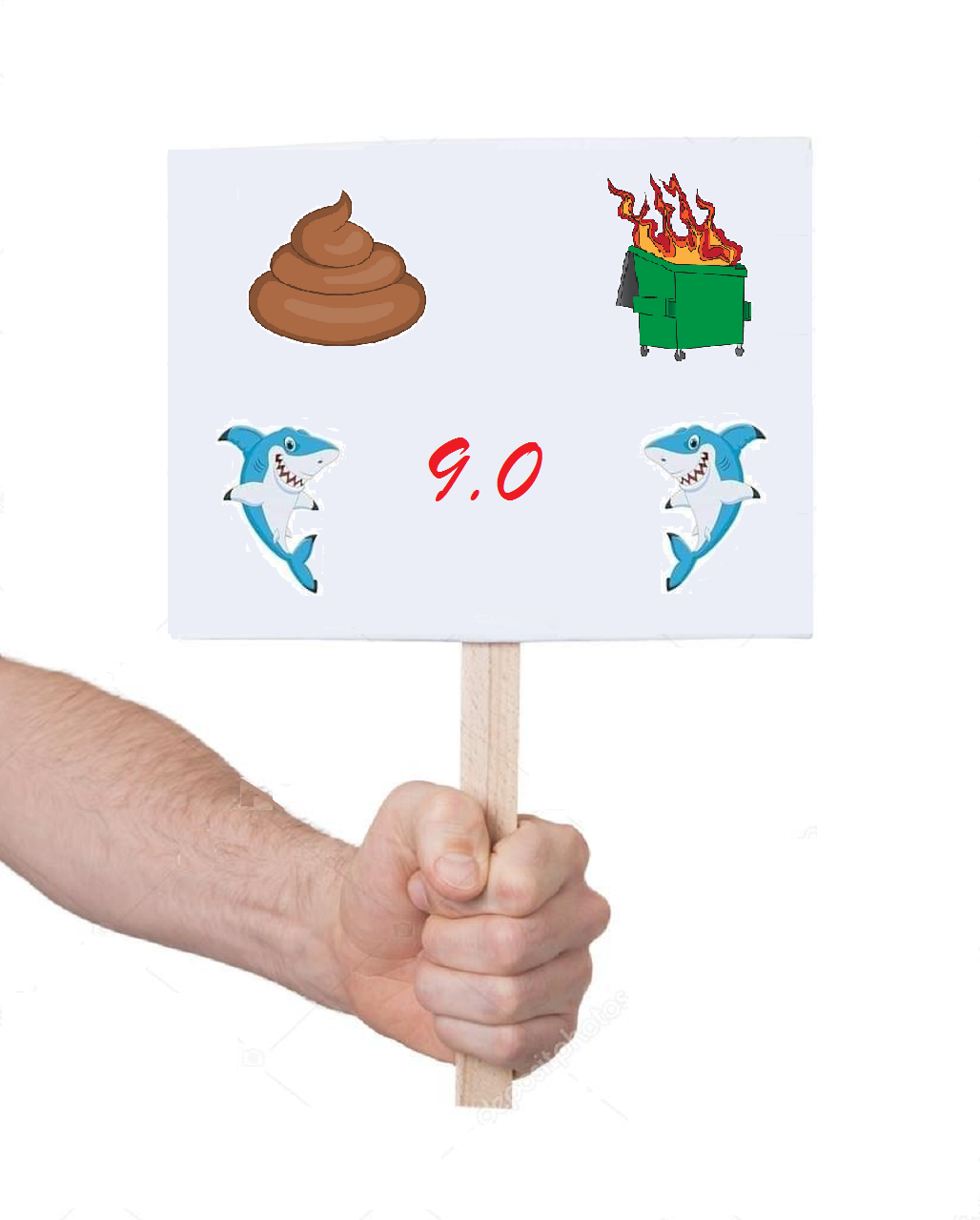 “Raiders of the Lost Shark” was a Wild Eye Releasing, and the trailer can be found HERE.  Brett Kelly Entertainment has their own trailer HERE.  Youtube is full of reviews, this one by MrTonyoftheDead kind of hits the nail on the head.

C’mon, who doesn’t love a stinky shark moovie, right?  For all its failings, the moovie is still a lot of fun, so you might as well add it to your cowllection!  You can buy it at Amazon, OR better yet, from Best Buy on a Shark Attack 3 Pack along with “Sharkenstein” and “Shark Exorcist’!  And of course you can always find it at Target.  Not a lot of merch out there for this, but you can get the soundtrack from Amazon, if you wish.  And for you Brett Kelly diehards out there, HERE is the on-line script of the moovie, so you won’t miss even one tasty verbal morsel.

Well, the kids at Indie Film Cafe say just when you thought it was safe to watch a cheap, silly shark flick, “Raiders of the Lost Shark” will make you laugh yourself into shark chum.  Check it out, but keep an eye peeled on the sky!